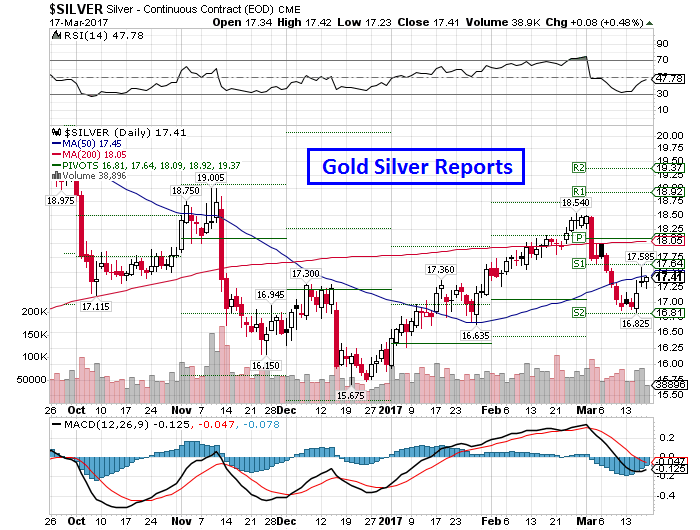 Gold Silver Reports — Technically market is under short covering as market has witnessed drop in open interest by 1.39% to settled at 13655 while prices up 311 rupees.

Silver on MCX settled up 0.77% at 40909 as weakness in the U.S. dollar, following Wednesday’s Federal Reserve decision, provided a runway for gains.

The Fed on Wednesday lifted benchmark interest rates by a quarter-point as widely expected. The central bank’s statement and forecasts for future rate increases was seen as less aggressive than had been anticipated.

Still, some market strategists see near-term headwinds for precious metals, especially since the bullish sentiment spurred by Trump’s proposals to juice the U.S. economy through fiscal-stimulus measures haven’t entirely vanished. Although there are lingering concerns about Trump’s ability to implement his pro-business agenda, their enactment could cause the Fed to quicken its pace of rate increases.

First-time claims for U.S. unemployment benefits saw a modest decrease in the week ended March 11th, according to a report released by the Labor Department. The report said initial jobless claims edged down to 241,000, a decrease of 2,000 from the previous week’s unrevised level of 243,000. — Latest Silver Mcx Reports — Neal Bhai Reports