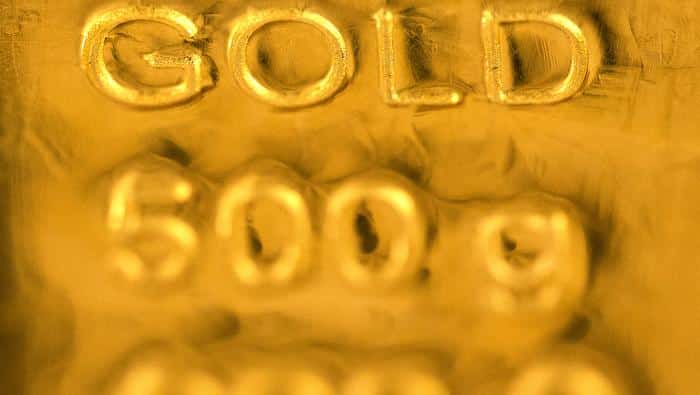 Gold Price Forecast: Gold price is looking to extend Friday’s downbeat momentum, starting off a big week on the wrong footing. The strength in the US dollar alongside the Treasury yields on expectations that the US Fed will hike the key rates by 25 basis points this week weigh negatively on the non-interest-bearing gold.

Meanwhile, the greenback also retains the bullish bias, as it continues to draw safe-haven bids amid looming uncertainty over the Russia-Ukraine war. The optimism over the weekend’s most upbeat assessments by both sides on the progress of their talks was overshadowed by Russia’s deadly attack on a Ukrainian military base near the Polish border, which killed at least 35 people on the Yavoriv training base.

Additionally, there are signs of further Russian missile attacks in the coming days, which leave investors on the edge. These concerns have revoked the improved market mood, prompting risk-off trading to return while a sell-off in Chinese stocks also temper the investors’ sentiment. Covid resurgence in China amid a persistently high number of cases has put the southern city of Shenzhen under lockdown, which has stoked fears over the country’s economic health. Another reason for the market’s worry is whether Russia will default on its debt, as senior US. and China officials to meet on Monday for discussions concerning Ukraine.

Amid a data-light economic calendar, risk trends will continue to lead the way, with Ukraine, the Fed and now China concerns back in play. Should risk aversion intensify in the upcoming sessions, the US dollar is likely to benefit further and regain 100.00 vs. major rivals. Gold price, therefore, appears vulnerable, also undermined by the ongoing rout in the US Treasuries.

On Friday, a sudden turnaround in risk sentiment, following comments from Russian President Vladimir Putin on talks with Ukraine, pulled outflows from the safe-haven gold, as the price fell to five-day lows of $1,959. Putin said that “there are certain positive shifts, negotiators on our side tell me.” Although the negative tone on Wall Street helped gold price to recover some ground amidst the rally in the dollar and the yields. Note that gold price hit 19-month highs at $2,071 last Tuesday and since then has been on a corrective downtrend.

On the four-hour chart, gold price is now consolidating the latest decline below the mildly bullish 50-Simple Moving Average (SMA) at $1,979.

The Relative Strength Index (RSI) has stalled its descent, turning flat while below the midline. The leading indicator, however, continues suggesting that bears could likely retain control going forward.

On selling resurgence, gold sellers could retest Friday’s low of $1,959, below which a test of the $1,950 psychological barrier will be inevitable.

Recapturing 50-SMA on a sustained basis is critical to initiating any meaningful recovery towards $1,994, which is a powerful resistance.

That level is the confluence of the bearish 21-SMA and the rising trendline support now turned resistance.

Acceptance above the latter will open doors towards the $2,000 mark, beyond which the $2,010 supply zone will be challenged once again.