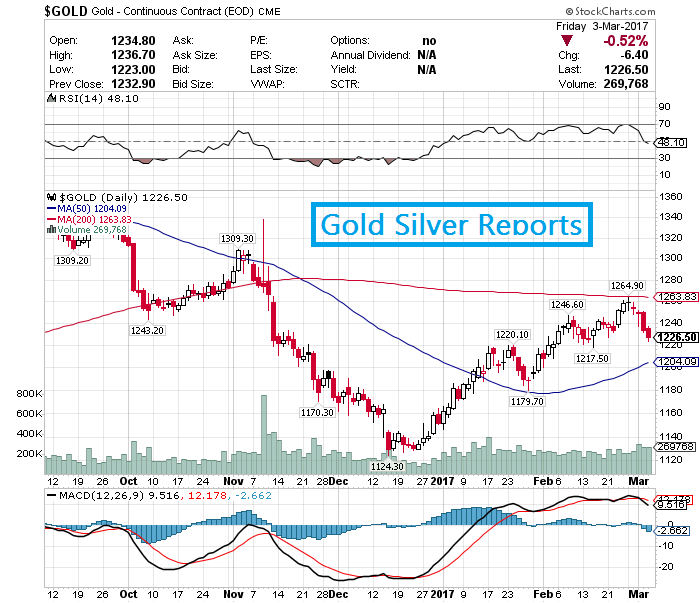 Gold Silver Reports ⭐⭐⭐⭐⭐ — Gold prices declined in last week’s trading as the US dollar index (DXY), which measures the greenback’s strength against a basket of six major currencies, rallied. Gold prices fell to a low for the week on Friday, at $1,223 an ounce, the lowest level traded since February 15. At week’s end, however, the contract for April settlement on the COMEX division of the New York Mercantile Exchange ended well off the low of the day at $1,235/ounce. This represented a loss of 1.8% for the week overall.

Gold prices appeared due for a pullback in last week’s trading given the overbought condition resulting from the advance into the late February high. And, the settlement well off the low of the session on Friday indicates there could be a positive start to the week.

The dollar benefited last week from comments from various Federal Reserve officials regarding the potential for an interest rate increase at the March 14-15 FOMC meeting.

On Wednesday of last week, FOMC member Lael Brainard hinted at the possibility of an early rate increase. Earlier in the week, Fed member William Dudley commented that a rate hike is likely “relatively in the near future” and he expects to continue to remove accommodation. In addition, on Tuesday, Fed member John Williams said a rate increase is up for “serious consideration” at the Fed’s March meeting.

At present, Fed fund futures are indicating a 79.7% probability of an interest rate increase at the March 14-15 meeting. This is up from 77.5% the session prior and 33.5% from earlier in the week.

On Friday, it was reported that the US ISM non-manufacturing index strengthened to 57.6 for February from 56.5 the previous month. Markets were expecting the figure to be unchanged at 56.5 and this was the strongest reading since the data for October 2015.

Also, in a speech on Friday to the Chicago Executives’ Club, Federal Reserve Chair Janet Yellen stated that the Federal Reserve Open Market Committee (FOMC) will evaluate at its meeting later this month whether employment and inflation are continuing to evolve in line with expectations. If they are, a further adjustment of the Federal Funds rate would likely be appropriate.

Therefore, while the week may start out on a positive note for gold prices, given the strong close on Friday, it appears there is more room to move on the downside, with another test of the $1,220/ounce forthcoming, as the dollar will likely rally in anticipation of an interest rate increase.

The latest Commitment of Traders Report from the Commodity Futures Trading Commission, with data as of the February 28 close, showed that large speculators increased long holdings of gold futures contracts by 27,821 and reduced short holdings by 12,214 contracts, At the same time, commercials, or large hedgers, decreased long holdings by 3,681 contracts and increased short positioning 36,662 contracts. The increase in short positioning by commercial traders is an overall bearish sign for gold, and suggests any near term rebound following Friday’s close off the low of the session appears best used as a selling opportunity. — Neal Bhai Reports