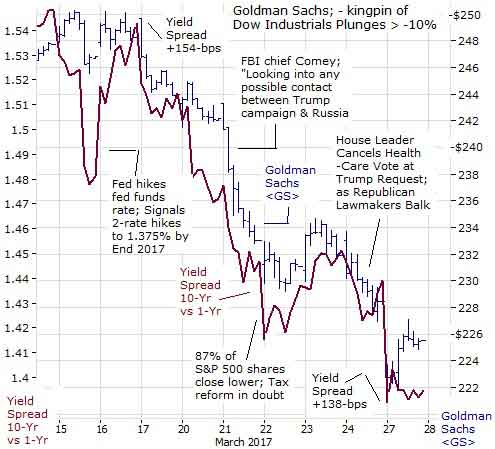 Gold Silver Reports  — As President Donald Trump himself used to say on the campaign trail….

“Politicians are all talk and no action,” and..

“If you don’t deliver the goods, people will eventually catch on.” – Trump in the Art of the Deal

The gambit was straight out of Donald Trump playbook; he told House Republicans that it was now or never to repeal and replace Obamacare and demanded a vote by Friday. No more negotiations. It was a bluff, and the Freedom Caucus and a few liberal Republicans called him on it. “He has left everything on the field when it comes to this bill,” said White House spokesman Sean Spicer. “The president and his team have committed everything they can to making this happen.” But the brash New York billionaire met his match in a former small-town real estate agent from North Carolina.

Now Trump’s been struck with a humiliating defeat on his first major legislative test, and it’s a body blow that calls into question whether he can move his bold economic agenda through Congress, including proposals on big corporate tax cuts and infrastructure spending that helped propel the Russell-2,000 index up about +15% since his election and lifted the financial sector up +30%. Yet House Republicans couldn’t round up enough votes Friday to repeal and replace a law they despise, raising questions about their ability to tackle other tough issues. Trump’s backing of badly flawed RyanCare raises big doubts about his judgment and deals a serious blow to his reputation as a “closer.” Most of Trump’s plans will require overcoming powerful opposition in Congress.

The benchmark S&P-stock index has surged to new all-time highs at 2,400 and is trading at 25-times its Trailing 12-month earnings, fueled by expectations that Trump could deliver on tax reform and infrastructure spending. But the big loss on health care will deprive Republicans of $1 trillion in spending cuts for Medicaid. Without the spending cuts, it will be much harder for Republicans to cut taxes without adding to the federal government’s red ink. “Yes, this does make tax reform more difficult,” said House Republican leader Paul Ryan. “But it does not in any way make it impossible.

Republicans often complained that they couldn’t do a tax overhaul when Obama was president. Now, Republicans control the House, the Senate and the White House, and they see a great opportunity. But they must use a complicated Senate rule called Reconciliation that would prevent Democrats from blocking the bill. But there’s a catch: Under the rule, the package cannot add to long-term budget deficits. That means every tax cut has to be offset by a similar tax increase or a spending cut. That’s why the loss on health care was so damaging to the effort to overhaul taxes. Ryan made this case to fellow House Republicans in his failed effort to gain support for the health plan. “That was part of the calculation of why we had to take care of health care first,” For the hardliners of the Freedom Caucus, a conservative group renowned for its ideological purity, they showed their veto power over Trump’s policies and severely dented his credibility as a leader in the process.

Tax reform won’t be any easier. The Freedom Caucus is intent on shrinking the federal budget deficit, and making Trump’s mission even more daunting. Now, if Republicans want to eliminate the ObamaCare taxes as part of tax reform and insure the bill does not add to the deficit – which they need to do to assure Trump’s reform process continues under Reconciliation, avoiding the need for 60 votes in the Senate – they will have to raise almost $1 trillion in revenue. Ryan has proposed a border adjustment tax <BAT> that is expected to generate as much as $1.2-trillion in offsetting revenues. However, the fact that the Republicans failed to pass a health-care reform bill makes the odds that they will pass a border adjustment provision much smaller.

Furthermore, conservative House Republicans, including the Freedom Caucus members who helped torpedo Ryan’s Obamacare repeal, are unlikely to support a giant tax cut that widens the US’s budget deficit. As such, investors might not get to see corporate tax rates cut to 15%, as Trump has proposed. Instead, it will likely be closer to a 30% tax rate. Republican leaders in Congress say they want a revenue-neutral plan – one that balances competing desires to cut tax rates and to slow the rise of national debt. Faster economic growth might help (ie; dynamic scoring), but it doesn’t fully bridge the divide.

For months, global markets have been pumped full of adrenaline on hopes that Trump’s tax-cutting, budget-busting fiscal plans would provide new stimulus for the entire world. However, irrational exuberance and animal spirits can only go so far without taking on more fuel. And unfortunately for equity market expectations, the cheap money infusion is reaching the end of the line. The Fed’s patience has run out on cheap money. No wonder stock markets are beginning to get a bit wobbly. There is a growing worry that Trump could fail to deliver on his growth-boosting promises.

Wall Street no longer believes President Trump’s agenda is a slam dunk. Trump’s stunning failure to repeal and replace Obamacare spooked investors, sending the Dow sinking amid rising fears on Wall Street that Trump’s bold promises of sweeping tax reform, regulatory relief and infrastructure spending is in doubt. Investors have begun to contemplate that the Trump agenda will be delayed, watered down or even derailed. The Dow is on track for its first monthly decline since October and worst month since January 2016. Big banks, Morgan Stanley (MS) Goldman Sachs (GS) and Bank of America (BAC) previously the hottest pockets of the market, suffered the worst losses in the month of March. The US Treasury’s yield curve has shrunk considerably since the Fed hiked the fed funds rate +25-bps to 0.875% on March 15th, and warned of two more rate hikes this year to 1.375%.

In the past Trump officials have said they want tax reform wrapped up by August. Trump himself has seemed more eager to talk about coming tax cuts than health care at rallies. But a big tax bill might take more time than that. The last time a major tax reform passed Congress, in 1986, it took about 323 days from introduction to finish. And Speaker Ryan’s current tax-reform framework depends heavily on a “border adjustment tax,” a complicated 20 percent levy on imports intended to encourage domestic manufacturing while raising enough revenue to pay for reductions in corporate and personal income tax rates. The border tax divides industry from industry – big box consumer retail chains that sell largely imported merchandise hate it. It’s unlikely to sail through the House. Will the House Freedom Caucus play the role of spoiler on tax reform, as it did with health care? — Neal Bhai Reports

The Trump Rally is Starting to Unravel  | Gold Silver Reports