The industry-funded American Petroleum Institute was said to report a 1.03 million-barrel build in domestic oil inventories, compared to expectations for a decline. At the same time, U.S. drillers have already restored about 80% of crude production in parts of Texas following the polar blast.

“People have been counting on continuous drawdowns, so there will be these surprise builds on occasion,” said Phil Streible, chief market strategist at Blue Line Futures LLC in Chicago.

Technical indicators were also showing a pullback in benchmark crude prices was overdue after they jumped 18% this month. The rally has been supported by production cuts from Saudi Arabia and an improving outlook for demand.

The futures curve continues to reflect tightening supplies, with Brent’s nearest contracts trading at a premium to later ones in a bullish pattern known as backwardation. The market is pricing in a strong short-term deficit, as oil stockpile declines continue at a rate of 2 million barrels a day to 3 million barrels a day..

“It’s unmistakable that we’ll see some increase, but how much we get” is still uncertain, said Bill O’Grady, executive vice president at Confluence Investment Management in St. Louis. “The Saudis like this price level a lot, because it’s high enough where they generate good levels of income but low enough to where they don’t anticipate a huge pickup in U.S. production.”

“This recovery is largely due to a return of electricity to the region,” Gilbert said.

The API report showed stockpiles grew at the nation’s largest storage hub in Cushing, Oklahoma, and gasoline inventories also rose. The U.S. government will report its storage figures on Wednesday.

Other energy infrastructure impacted by the U.S. deep freeze is also in the process of restarting. Plains All American Pipeline LP plans to restore normal operations at 16 oil pipelines after notifying users last week of a force majeure, according to a person familiar with the matter, while at least eight refineries in Texas were trying to restart as of early Tuesday, with varying degrees of success.

Bank of America said Brent prices could temporarily spike to $70 per barrel in the second quarter.

In the United States, traffic at the Houston ship channel was slowly returning to normal after last week’s winter storm, although production was not expected to fully restart soon. 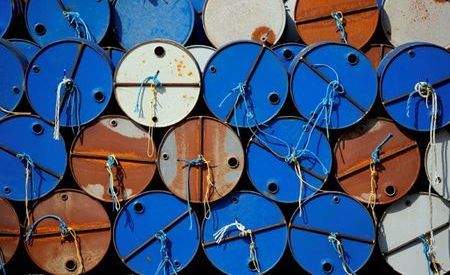